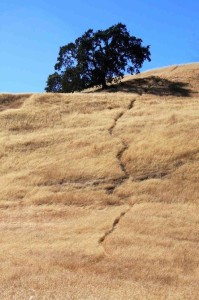 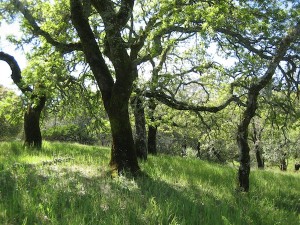 From the Sonoma County Regional Parks…

“Our favorite thing to do is announce a new park, so we’re thrilled to let you know about Sonoma Mountain Regional Park & Open Space Preserve, a 738-acre gem we’re working to open by the end of the year. The parkland is located on Sonoma Mountain Road near Pressley Road, southeast of Santa Rosa between Rohnert Park and the Sonoma Valley. Sonoma Mountain’s special features include forests of oaks and redwoods, numerous creeks, sweeping views of Sonoma Valley and the Santa Rosa Plain, and a 4.25-mile trail connection to Jack London State Historic Park. The park will comprise six properties on the north slope of the mountain, five of them purchased over the years by the Sonoma County Agricultural Preservation and Open Space District with revenue from a voter-approved sales tax. The Board of Supervisors last month OK’d the properties’ transfer from the District to Regional Parks. We’re now repairing a bridge at the main entrance to the site, and once that’s completed this fall, we’ll open the park for hiking, horseback riding, and limited mountain biking.” 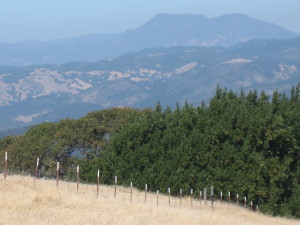 One view from the top: Mt. St. Helena

Back in September 2008, as the economy moved closer to the brink, not much was happening on the local real estate front besides foreclosure sales.  But one opportunity quietly emerged that launched a frenzy of activity and a lot of optimism in a generally economic time.

The opportunity also gave leaders in SMP a chance to create a wonderful story with a happy ending, through teamwork, old friends working together, their daughters learning to work together and the cooperation and coordination of public agencies and on-profits.

The opportunity arose when a 287-acre parcel near the summit of Sonoma Mountain known as the Stevenson Ranch came up for sale. Kirsten Lindquist, an agent for Sotheby’s in Sonoma, learned of the offering by accident, but immediately recognized the enormity of the chance to obtain and preserve this property for use by the public.

Ted Eliot, Pat’s husband and campaign manager for the recent ballot initiative that renewed funding for the Sonoma County Agricultural and Open Space District (OSD), got on the phone to Andrea Mackenzie, then general manager of the OSD; Ralph Benson, executive director of the Sonoma Land Trust and Valerie Brown, supervisor for District 1. Everyone recognized how special this opportunity was.

Over the next two months, while the economy crashed and most of us struggled to confront the holidays with reduced resources, Wendy and Andrea worked intensely to put together a deal that would satisfy the seller who demand the sale close by the end of the year. It was an unusually tight time frame for a conservation sale, which, as in this case, usually involves financing from more than one source. And financing options were shrinking.

Through long hours, diligent negotiating, a persuasive case for the public good and the trust and bonding that comes from old friendships and shared passions, they made the sale and the deadline.

Kirsten served as the buyer’s agent (a condition imposed by the seller) and then donated $50,000 back to the Land Trust.

Mickey and Pat cheered their daughters on, added historic information to help make the case for funding and delighted in the new alliances being formed in the process.

Wendy and Andrea developed the strategy and negotiated carefully, coming up with $125,000 from the Land Trust for an initial deposit, and then $8.45 million from the Open Space District and $1.5 million from the California Coastal Conservancy. The final piece from the conservancy was the last check issued by the state before its funding freeze took effect; the deal was a cliffhanger to the end.

Now, the mountaintop where Mickey Cooke and Pat Eliot rode their horses as young women in the 1940s has been saved forever as open space by their daughters in the first decade of the 21st century.

The acquisition engaged senior personal in the agencies and non-profits in a way they hadn’t previously experienced, leading to the possibility of future collaborations.